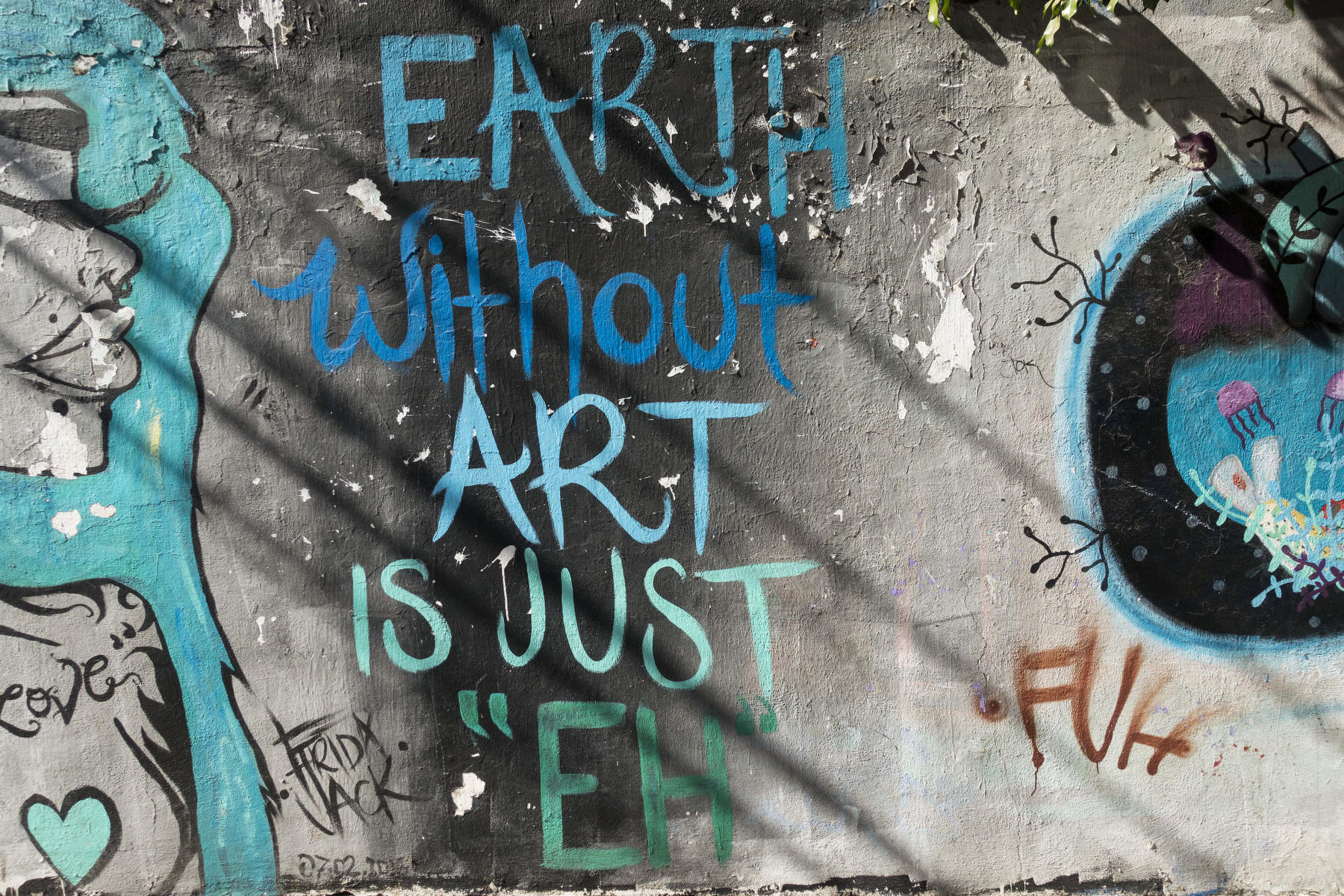 Earth Without Art is Just "EH" 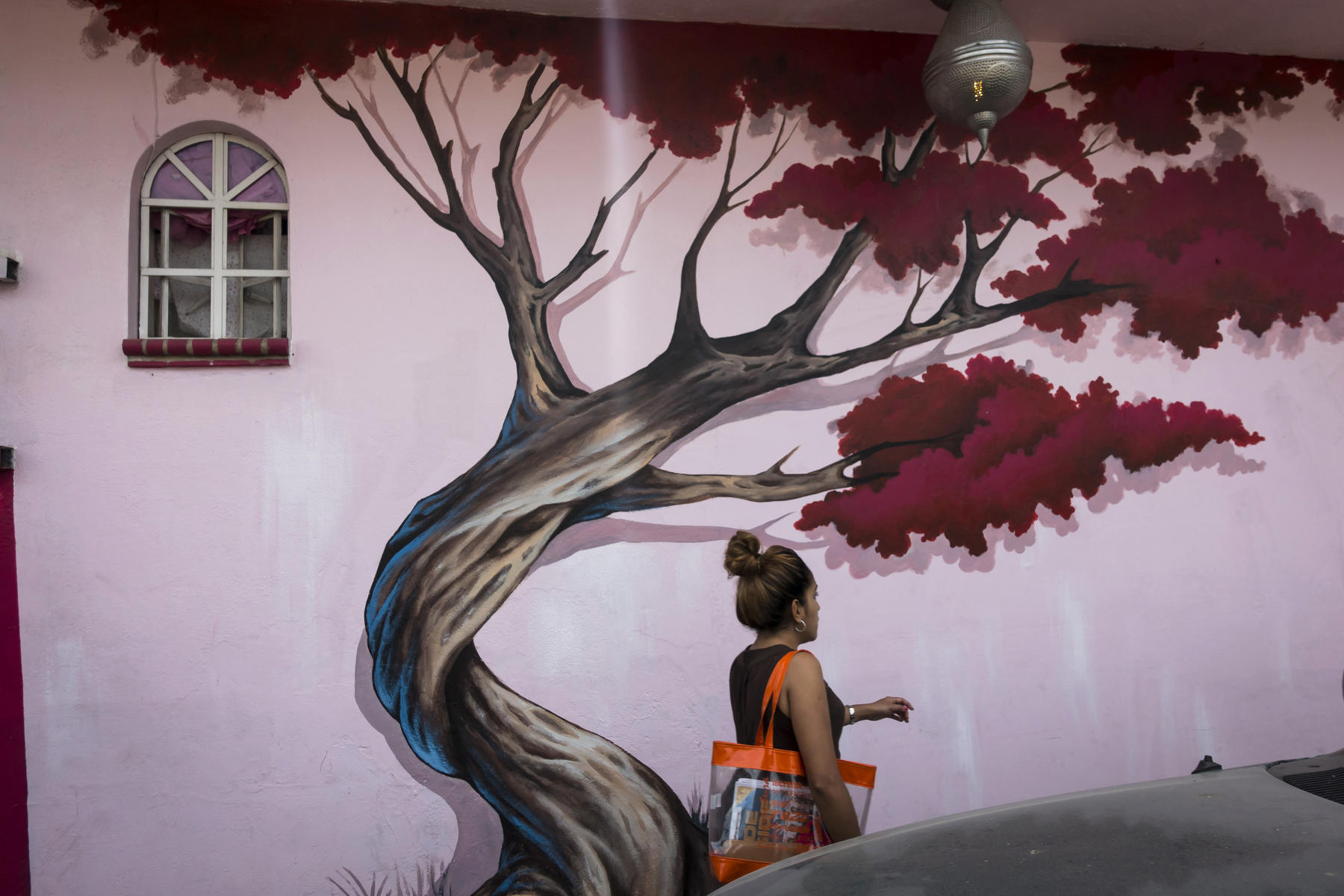 A real woman, a real window and a painted tree General Pancho Villa and his horse Seven Leagues painted on the side of a house in Old Town. 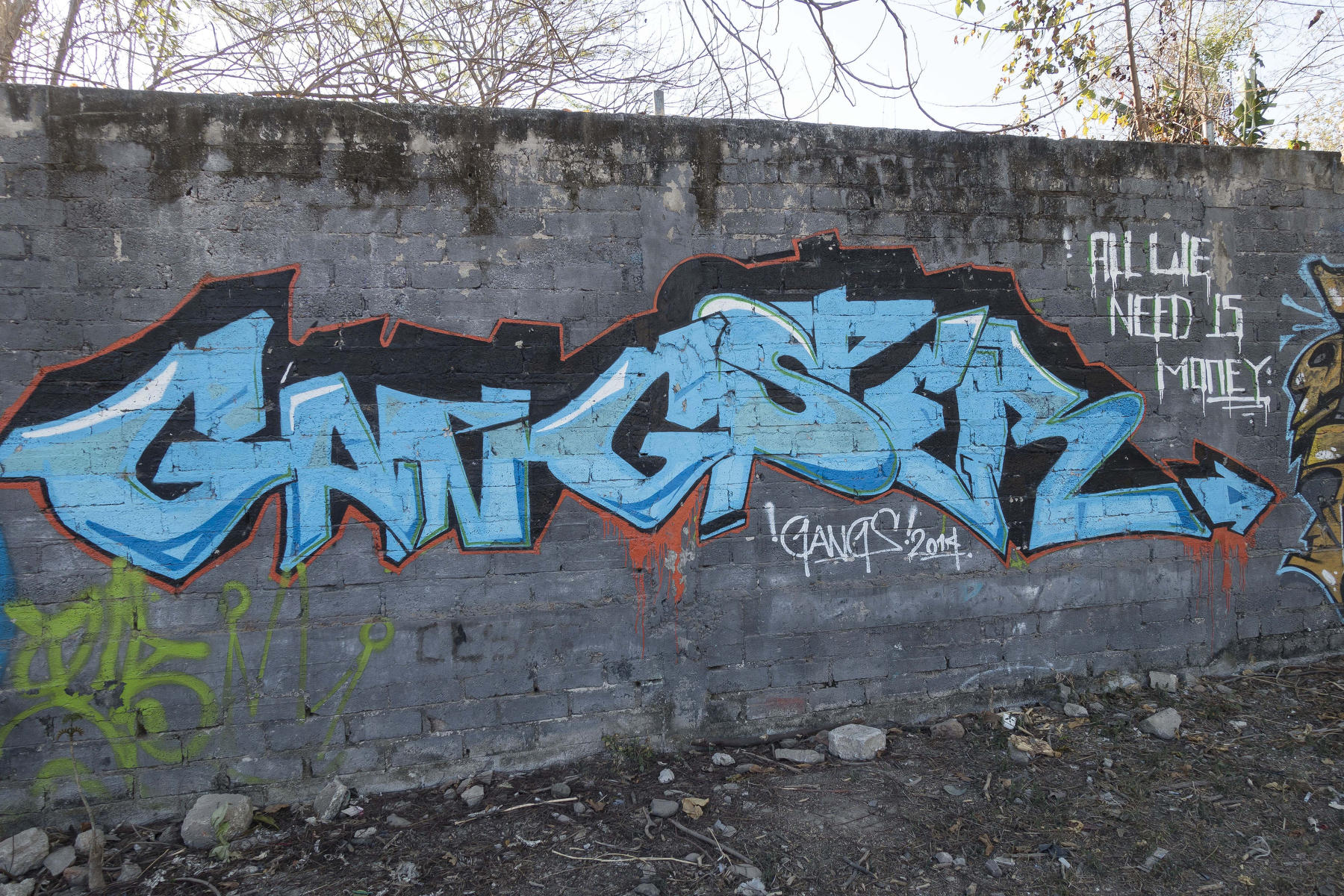 Humming bird on a park wall 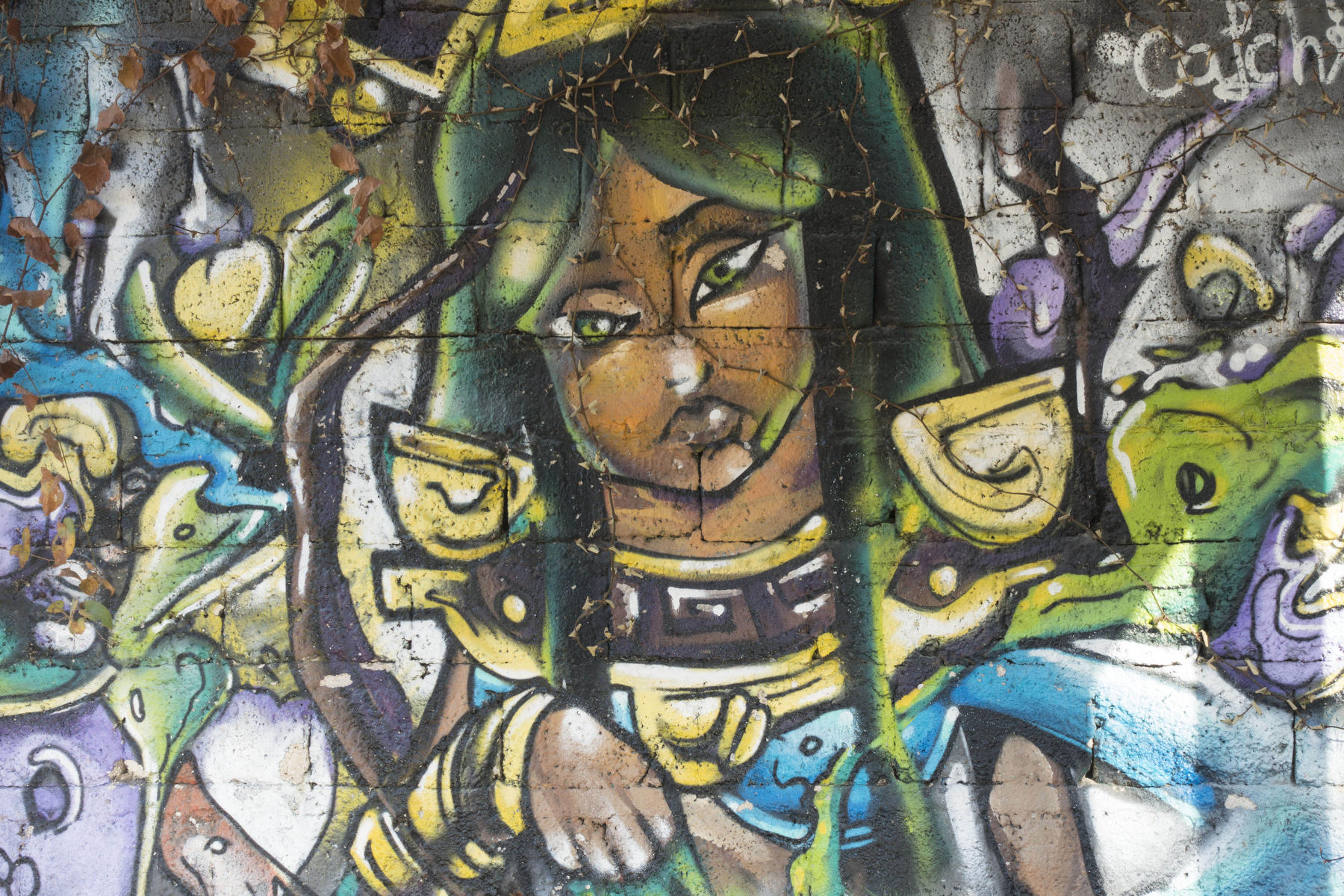 Mysterious painted eyes stare out from a park mural. 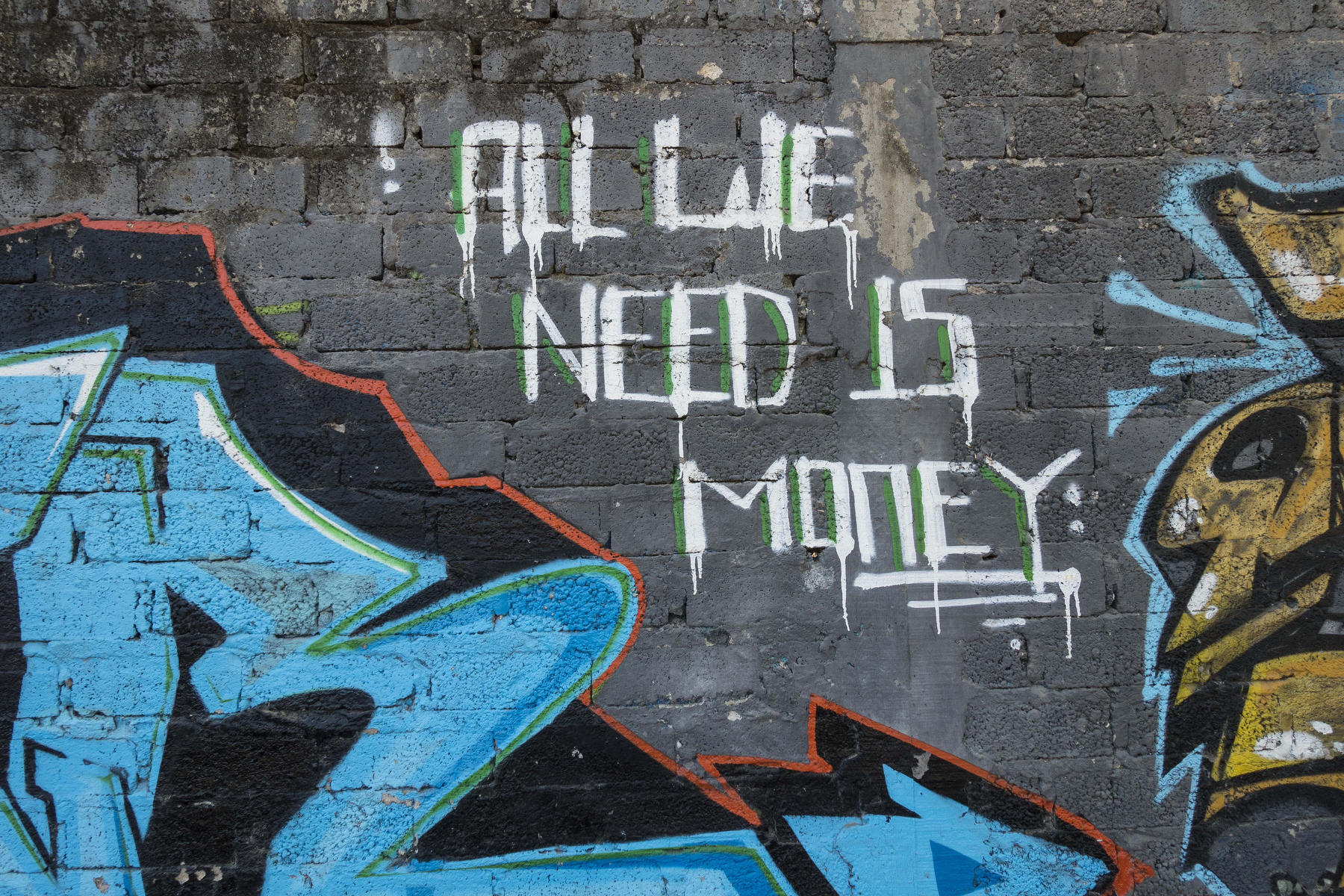 Graffiti quote that is part of a Gangster tag mural. All We need is Money. 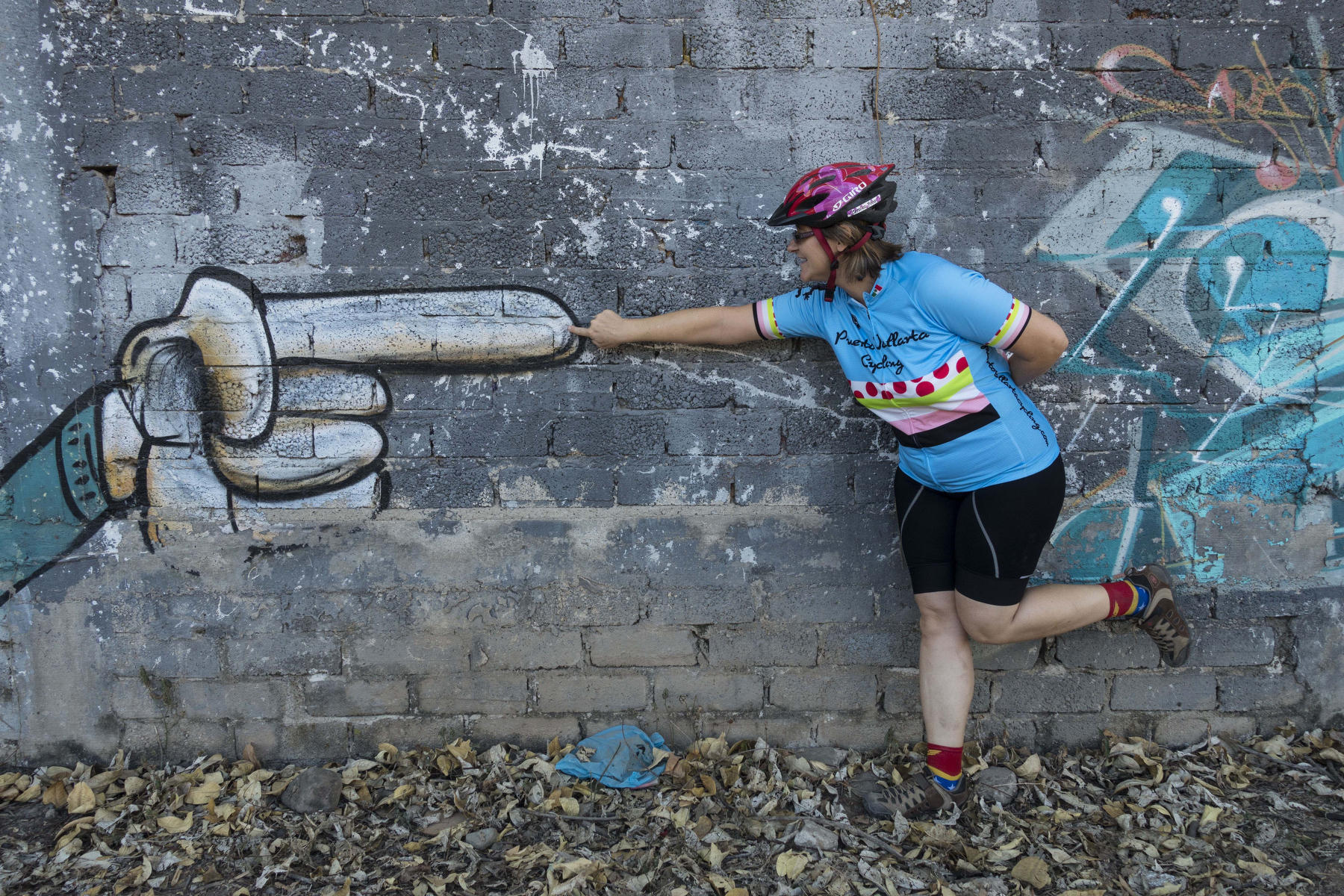 A painted house on a park wall 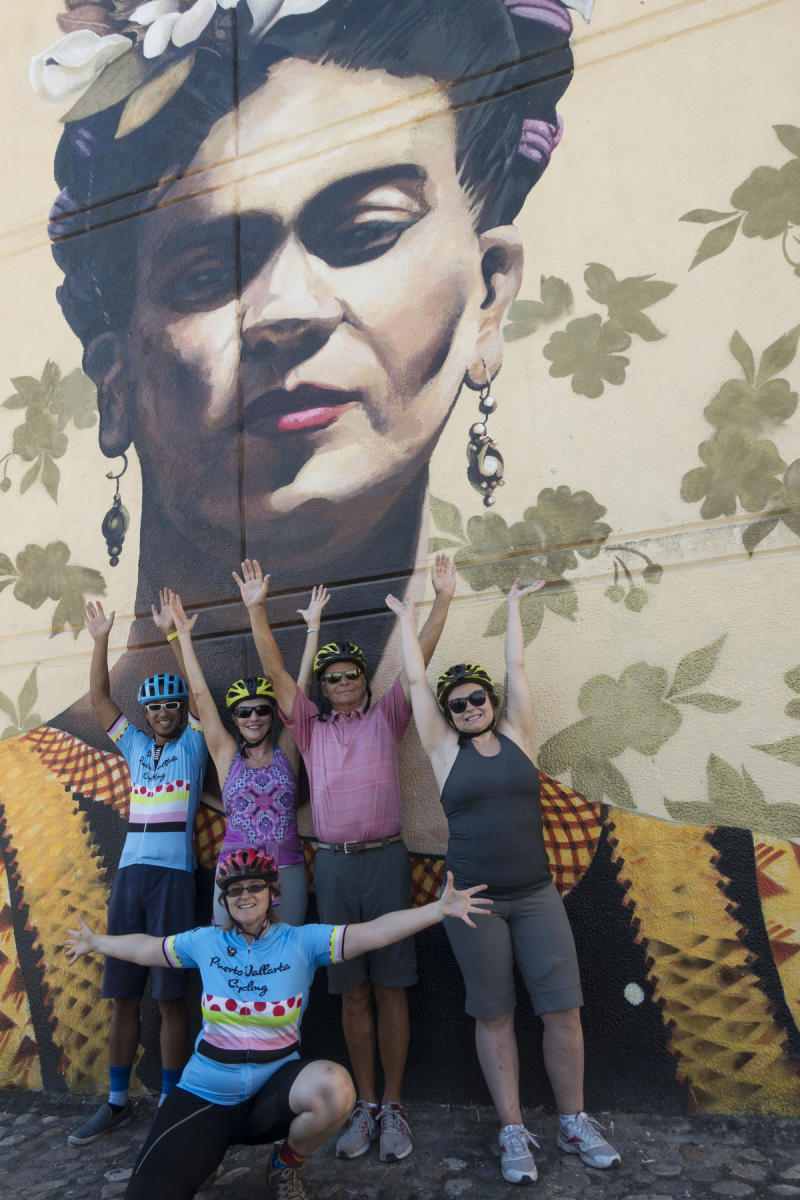 Participants and owners of the Fat Bike Graffiti and Art Tour posing in front of a three story high mural of Frida Kahlo. 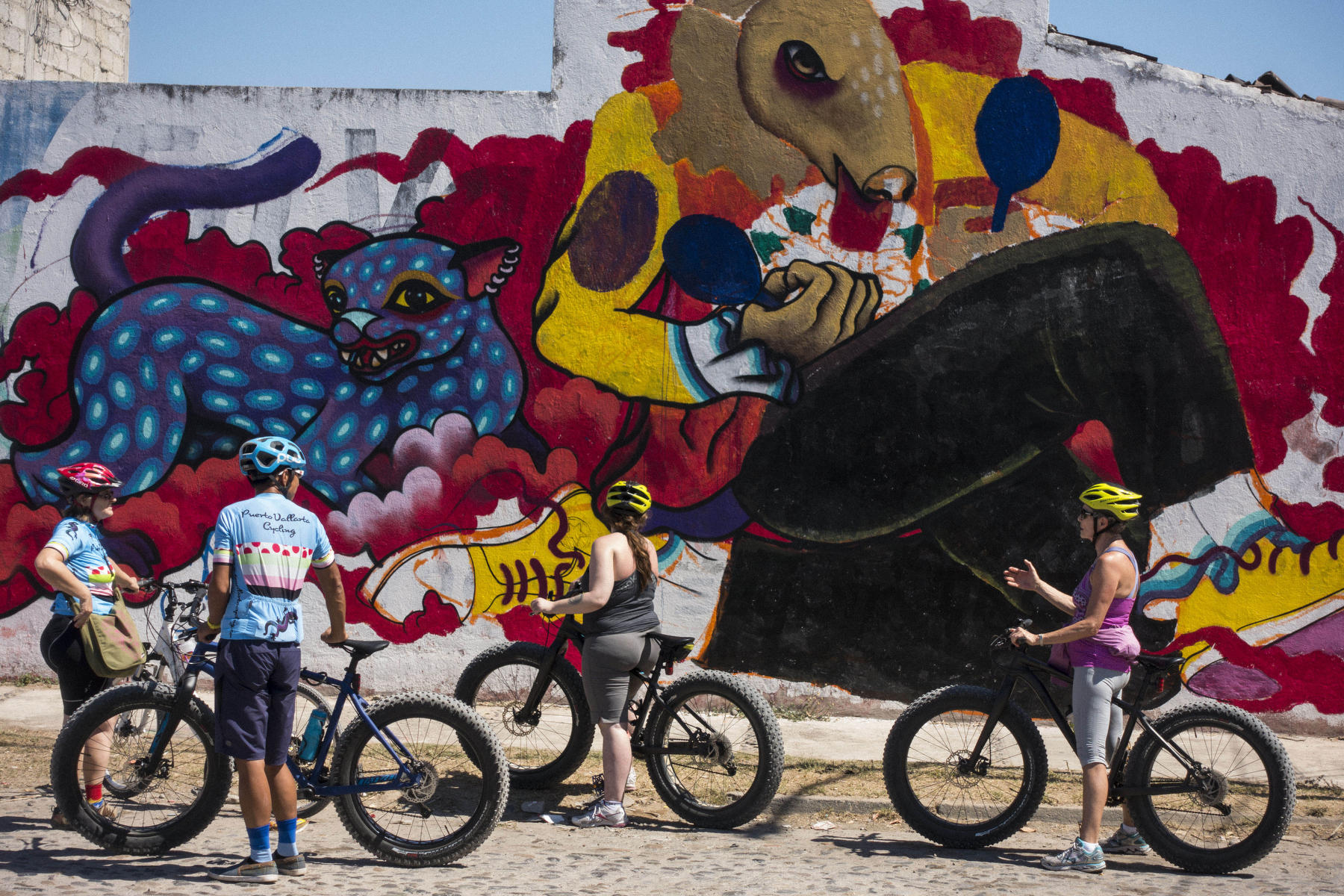 Wall painting depicting spraying a mosquito. Possibly a message about the Zika virus. 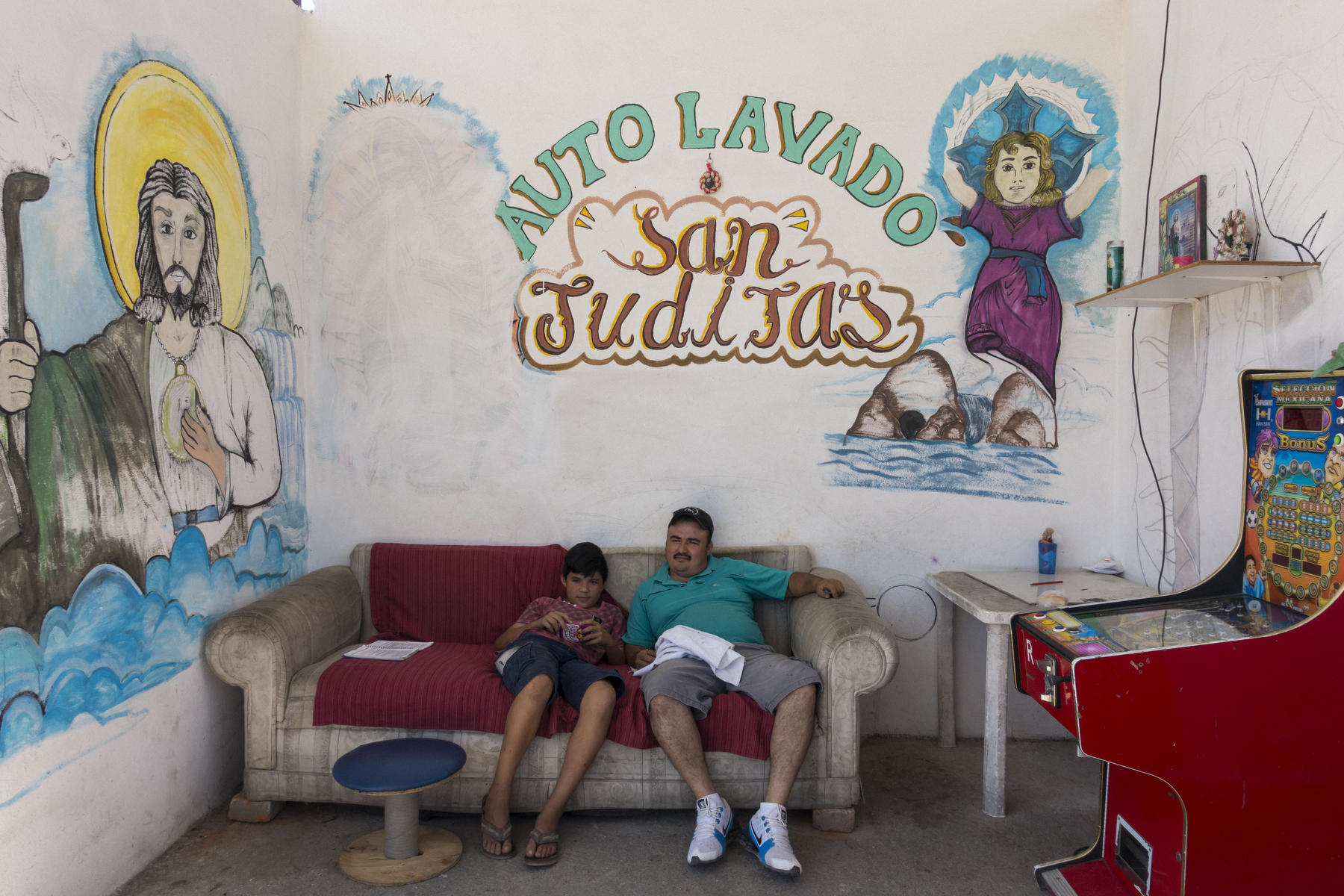 A father and son resting on sofa surrounded by religious murals at a car-wash. 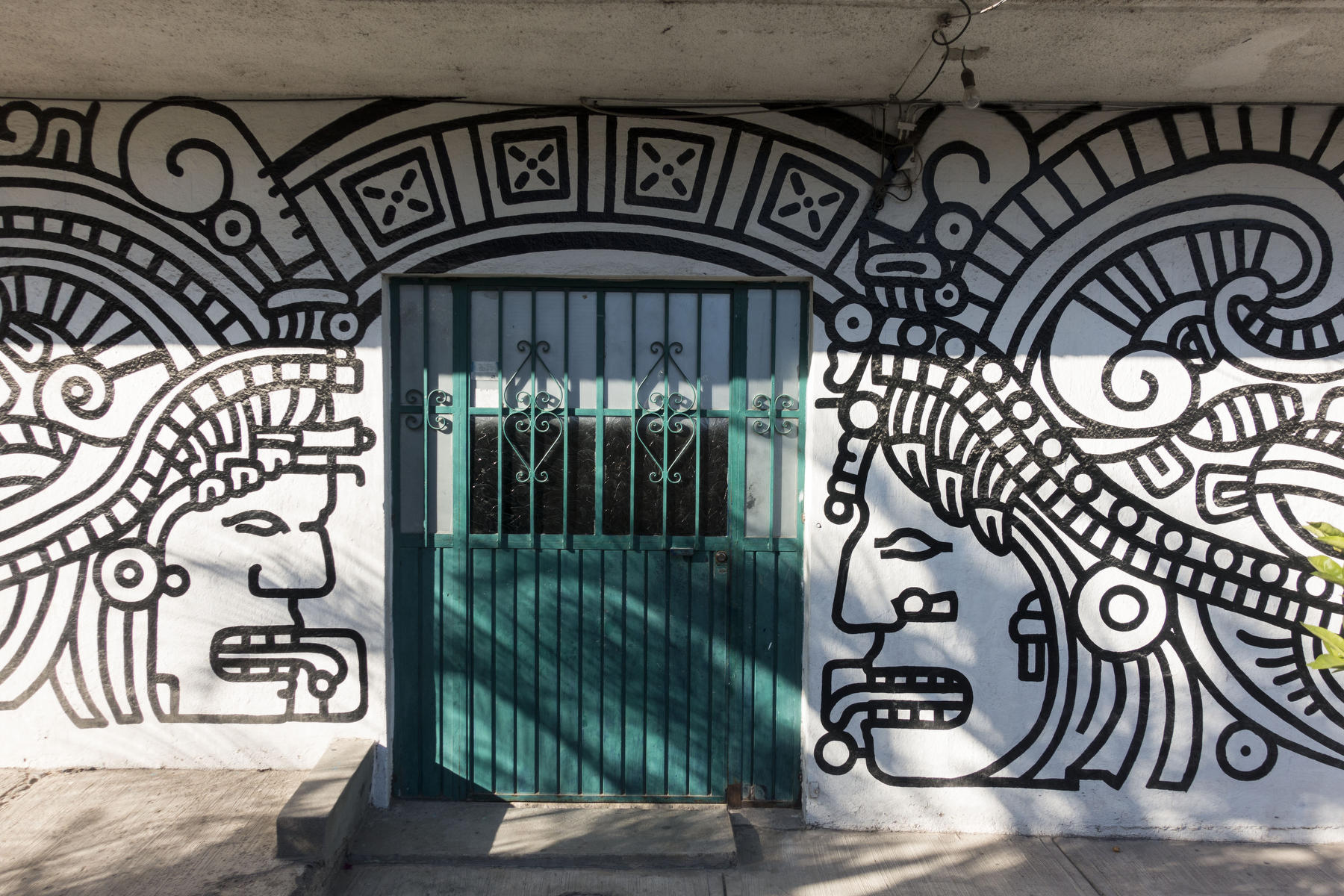 La CATRINA, symbol of The Day of the Dead on the wall of the cemetery. 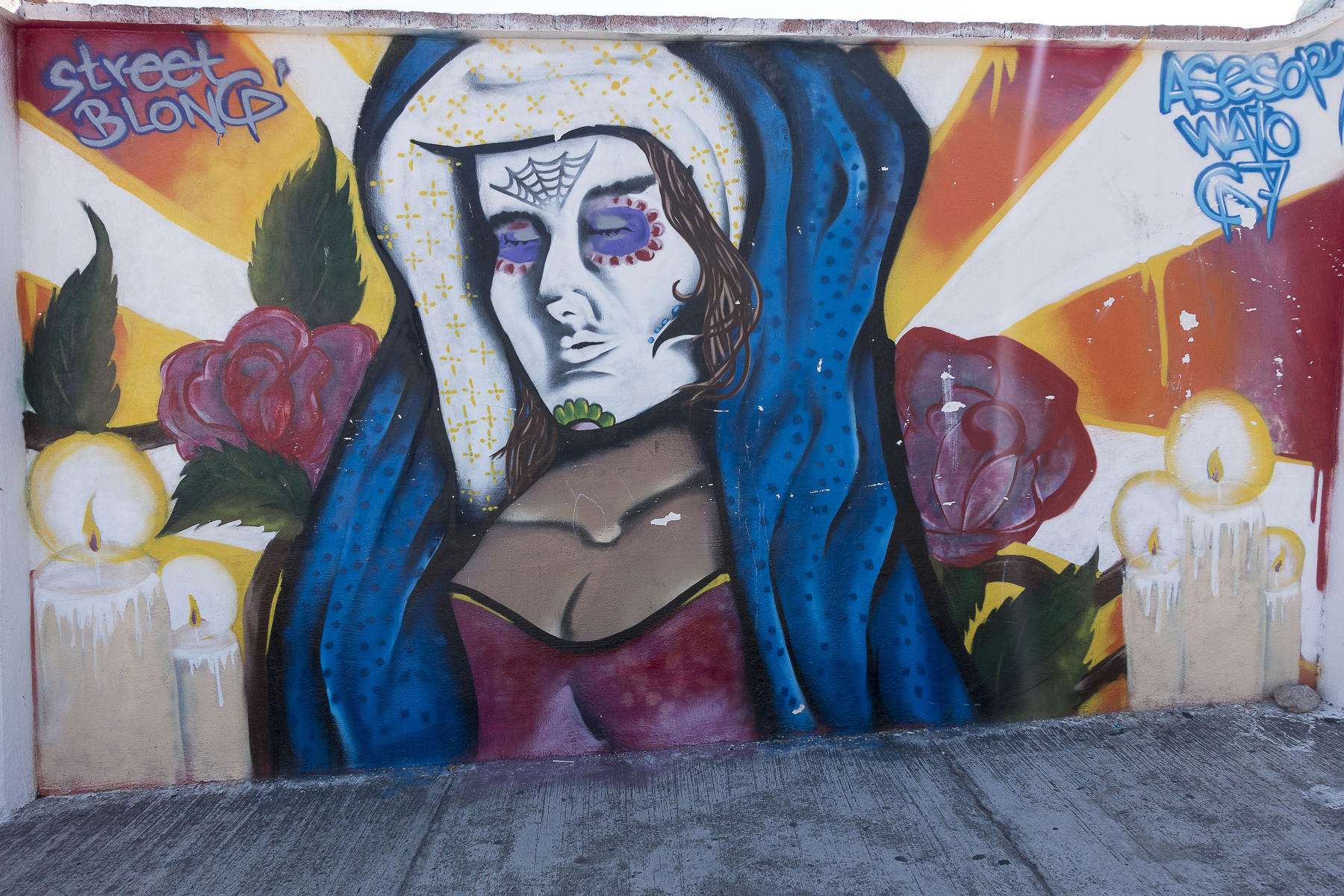 Portrait of a woman, CATRINA ? painted by Street Blong on the wall of the cemetery Cauce restaurant in Old Town features giant painted tomatoes on each side of the entrance door. A face wearing glasses decorates the shutters of an optical store in Old Town. 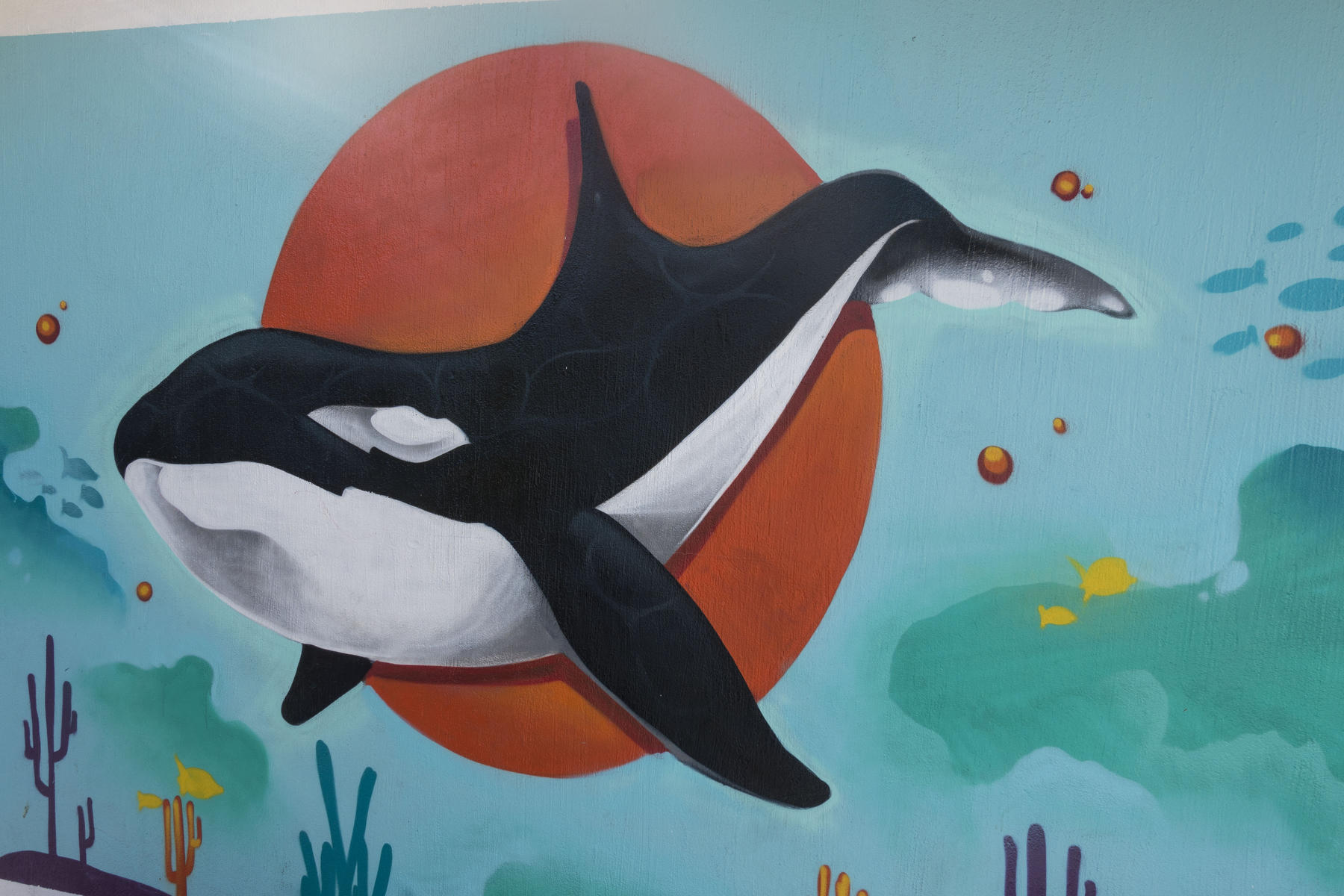 A skate boarder passes by the shadow of a fence on an underwater mural, painted as part of a Save the Reef project sponsored by a paint manufacturer

Photographs and text by Viviane Moos

What is street art? Graffiti, vandalism or public art? There is as yet no simple definition.

Street art appears throughout the city of Puerto Vallarta demonstrating a wide variety of styles and themes. Some are commissioned pieces associated with community projects, some decorate the entrances of private businesses and homes commissioned or simply invited to use their blank canvases walls, while others appear suddenly on bare enclosures in public spaces such as parks, expressing social and political concerns or simply patterns and words. In most cases they beautify the city’s landscape.

PV, as the locals call it, has become one of the Best Vacation spots in Mexico.*

The artists are as varied as their work. Some actively promote their art via social media and communicate with the public, whereas others choose to remain anonymous only connecting with the public via their work.  Similarly, these astonishing pieces can be the work of one individual or a crew such as Street Blong who is responsible for many murals around the city.

Several of the works have themes that are considered traditionally “Mexican”, featuring Catrinas (a Mexican female skeleton), the famous Mexican artist Frida Kahlo and animals associated with the indigenous cultures of Mexico.  Meanwhile others depict modern, urban or cartoon images that would be at home in most cities in the world. Traditional, funky, whimsical, or socially conscious, Puerto Vallarta’s graffiti and murals can be called all of the above, revealing an artistic community as diverse as the work it produces.

I joined the Fat Bike Graffiti and Art Tour in Puerto Vallarta, taking photographs of my bike-mates as well as Carmen and Clarence Poon, the two charming and very responsible tour owners. On following days I went out on foot and found some powerful additional murals. I know there are many that I did not discover, but that leaves me material for a second essay – and because of the impermanence of these works of art, who knows what will be gone and what new masterpieces will have been born.